As I said in the post below, we had a fun day with different things to do. I was in charge of the dunking booth. I had each of my bosses being dunked at different times of the day. Well boss #3 was last on the list to be dunked. I knew from the get go I was going to dunk Mr. S because he pulled a prank and had my child in on it too last Friday. So once I had him up on the tank I showed him how to latch the seat once he was dunked. Then I said to him this is how the target works and pushed it. I had one of the kids take a picture of me doing it. We had a great day of fun in the sun! 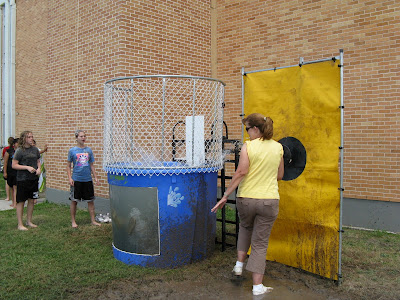